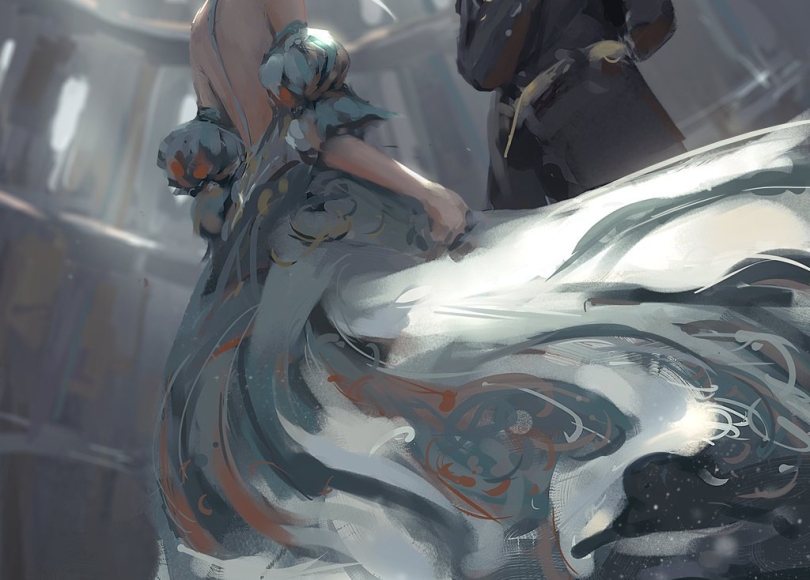 A great deal of time ago, I wrote this story. I never finished it, as I do with most of my projects, but I thought of posting it here for entertainment. Some day, I may find myself picking this up again…

“I told you. The blue one looks more slimming”, Eleanor called imprudently. “You don’t want to scare everyone off with your unsightly back fat”, she added.

Merritt rolled her hazel eyes, and replied without missing a beat, “Yes, but then who would be there to distract everyone from the bloated potato on your face. Oh wait…that’s your nose, isn’t it?” A cheeky smile curled Merritt’s lips.

Eleanor crossed her arms, and harrumphed indignantly. But then a moment later they both looked at each other, and laughed.

“You know…”, said Eleanor pointedly, “ I heard from Mrs. Knowlton that a great many families from the Danton entourage will be in attendance tonight. Not to mention, Mr. Levi Danton himself.”

Merritt raised her eyebrow in confusion. “So?”.

“Well, you two were childhood friends, were you not? And it’s been so long seen you’ve seen each other. Aren’t you excited to make his acquaintance again?” Eleanor questioned her sister, as she looked at herself in the mirror approvingly.

A laugh bubbled from Merritt’s throat at this. “Well of course I’m excited to see him! I haven’t had anyone to talk to in months besides you! And your conversation is as stimulating as staring at a blank wall.”

Eleanor glared at her younger sister. “Ha. HA.”, she replied sarcastically. “ And you know that’s not what I meant.”

Merritt finished smoothing out her sapphire blue gown, and looked at her sister in bewilderment. “No? Then, I’m positive I have no idea what you’re talking about.”

Sometimes, Eleanor felt that they weren’t even sisters. Merritt could be so dense! “I meant aren’t you excited to see how he’s changed? To see if…feelings have changed since you’ve been a part? You’ve both grown so much in the last 7 months. He’s a man now, and you’re…well you I guess.” She shrugged.

Merritt continued to scrunch her brows in bewilderment. “In…what way?”, she questioned.

“Oh nevermind!”, Eleanor scoffed. “ You’re the worst person to chat with about girl matters. I swear, I’m better off talking to Papa about these things than you!”. Eleanor threw up her hands in exasperation, and walked off, leaving Merritt to finish getting ready.

She looked at her reflection in the mirror, seeing her pale blonde hair, and even paler complexion. Merritt actually knew what she meant. She just didn’t think things were like that for her, and Levi though. He was her best friend since childhood. They played together. Grew up together. Got into trouble together. “We even made a promise to each other. Friends forever.”, she recalled to herself. That wouldn’t change after just a few months a part….would it?

4 months ago in Brick Brack’s Shack:

Three figures stood in a dark, and empty room of the festively named tavern, Brick Brack’s Shack. It was a place for those without a place to find refuge for the night. And for others, it was a place for dirty dealings, and any manner of deed that should not be spoken of in the daylight hours.

One of the three figures appeared to be wearing a black, dusty looking robe. His hood was covering most of his face from view, but the little illumination there was still highlighted his milky white eyes, which stared at the door stoically, waiting. The other two were chatting quietly.

The shorter one was a flashy girl in radiant colors. She had striped and polka dotted mismatched socks that somehow complimented the rest of her random ensemble that looked thrown together. Her short hair was bright, cherry red, and at the top of her head were two furry wolf ears. Her eyes were golden like the sun.

The one she was talking to was a handsome, tall man with black hair. He was surely dressed for a party with a fine dark coat, decorative maroon vest, and top hat. His shoes were polished, and his black gloved hands were pressed around an expensive looking cane with two heads, one laughing, and one crying.

The door opened just then, and the two stopped talking. They all looked at the boy who walked into the room.

“Sorry I’m late”, he said apologetically. “I just got into town, and had some things to take care of.”

“The only one who stands to be hurt by your lateness, Levi, is you.”, said the tall gentleman.

“So, after all this time, you are ready to stop resisting, and obediently work off your father’s debt to us?”, questioned the tall gentleman with an elegantly raised brow.

Levi sighed heavily as he replied, “The way I see it, there’s no way around it. You’ve got me pinned into a corner here. Which I’m sure was part of your plan all along.” He glared at them all.

The red haired girl smirked at the tall man, and exclaimed, “Yup! Soren’s great at that!”

“Soren, huh?”, Levi said far too casually. “ Guess I never even bothered to learn your name after all these past months. I’ve just been calling you Demon, or Bastard.”

Soren smiled, yet his eyes remained cold as he said, “Yes, well, Whelp or Bitch suits you too, I think.”

“Haha! He called you bitch!”, giggled the small wolf girl.

The dark robed man cleared his throat, startling Levi who didn’t even notice his presence.

“Shall we begin?”, he rasped, speaking for the first time since entering the room.

Soren nodded in agreement. The girl smiled wickedly. “I’m Ylfa, your witness, and the chatterbox over there is Rumel by the way. He will be officiating the ceremony.”

“Kneel in the middle of this etching.”, the mysteriously cloaked Rumel said.

Levi also hadn’t even noticed the complex drawing on the floor. He couldn’t make heads or tails of it, but it must have been a spell of some sort.

“Oh, and I suggest you find something to bite down on.”, Ylfa said cheerfully. “Don’t worry about the sound. No one will hear your screams. The walls have been silenced already.”

“Wha-?”, Levi started to say with more than a little concern in his voice, but as soon as he entered, the magic rune lit up, binding him inside the spell.

A flash of silver caught Levi’s eyes from Soren’s direction. He pulled out a sharp dagger from his coat pocket. Levi gulped in fear. He wasn’t informed of this! Knives were not good! Sweat was starting to bead on his forehead as he thought that maybe he should have asked more questions about this first.

Soren stripped off his black glove, and made a large cut along his own palm. ‘As long as it’s not me’, thought Levi.

“With this blood, we bind.”, said Rumel, chanting from a rehearsed verse only he knew the words to.

Ylfa brought over a large wooden box with ease, which was surprising considering it looked like it weighed a great deal more than she did. She opened it for Soren, and backed away quickly, not at all wanting to be near what was inside. With his bloody hand Soren reached into the box, and grabbed a long, silver chain, taking care to smear his blood all along the individual links as he did so.

“With these chains, we ensnare.”

And at Rumel’s words, the bloody chains levitated from Soren’s palms. Levi was astounded. He knew magic was real of course, but couldn’t help but be amazed when it was right in front of him all the same. It wasn’t every day you were part of a spell being cast! Even if it was to his own detriment.

‘Don’t think the boys back home will believe any of this’, he mused to himself darkly.

“With these bonds, your will be broken.” Rumel’s words echoed throughout the room ominously.

Like a whip, the chains flew to Levi’s skin, wrapping and coiling around him. The silver gleamed red with Soren’s blood, and burned itself into his body, melding silver and flesh together. Levi couldn’t help it.

The chains scorched and wriggled under his skin, physically burrowing into his body. The pain was excruciating. It was the worst feeling he ever experienced. It was both tearing his body apart, and melting it from the inside. His throat was hoarse with screaming, and he could feel his vision darkening. He was about to pass out.

“The shackles of subjugation command you to speak. Do you bequeath your life to this demon?”, called Rumel. His words sounded as if they were underwater. Everything was fading to Levi. He felt so weak, so stripped of his being.

“Levi! Answer!”, shouted Soren, briefly cutting through the murky fog of his mind.

Before his eyelids fluttered closed, and his muscles completely gave out, Levi sealed his fate with the whisper that would change his life forever.